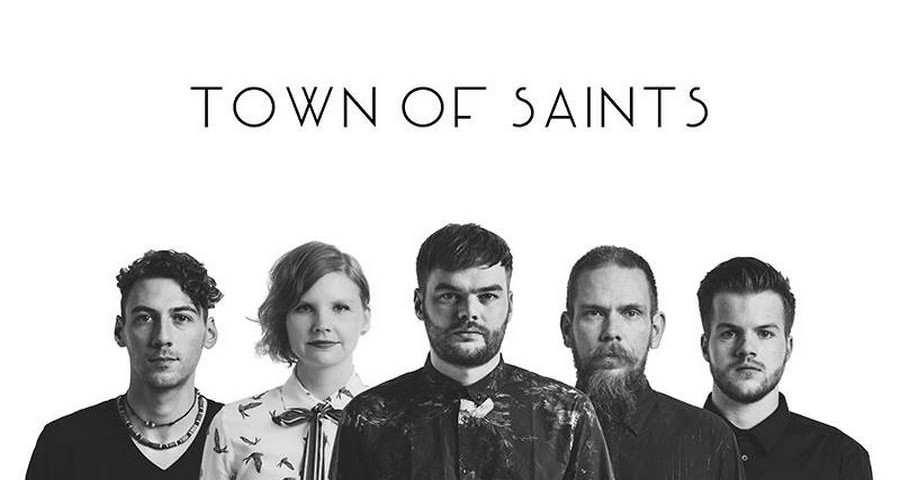 The Dutch/Finnish Town of Saints started as a busking act in 2010, when Harmen Ridderbos (lead vocal/guitar) and Heta Salkolahti (violin/vocals) met each other in the mountains of Austria. The following five years the duo toured extensively throughout Europe. Meanwhile transforming from an upbeat indie-folk act to a five-headed groove-machine.

Town of Saints’ new album ‘No Place Like This’ (Snowstar Records / Caroline International) mixes tropical and darker influences. It is rich in being minimalistic as well as grand orchestral arrangements, along the lines of Arcade Fire, Local Natives and Paul Simon’s ‘Graceland’. It succeeds the debut album ‘Something To Fight With’ (2013), which was acclaimed in the Netherlands as well as outside their home country. The success of the album resulted in performing over 130 live shows (amongst which Dauwpop, Indian Summer Festival, Ramasuri Rock and Lost in Music), throughout 11 European countries, in 2014 alone. Within half a year after the release of their debut album, Town of Saints was proclaimed as one of the most promising Dutch acts by national radio and television.

‘No Place Like This’ is a journey that describes the ambiguity between modern life and our primal nature. It adopts a position on the rationality of our modern society and questions whether or not it, in the end, is rational at all. ‘No Place Like This’ can be situated in different locations: your own environment, this globe or the universe in which we suddenly seem to be part of. This phrase is closely related to ‘there is no place like home’. The question whether or not this is a contradiction per se or just a confirmation seems to be different every day, according to text writer Harmen Ridderbos.

“Sometimes I would rather flee from my house and this small country to situate myself in the bigger picture. On the other hand I need that homely security, either to cherish it or as a safe house.  I am trying, with this album, to get more out of my habitat and look for an explanation to all the things surrounding me. In doing so I sometimes end up with the piddling things and seemingly unimportant truths about my own life. In Modern Life I sing ‘Modern Life, where does it stop’ at first. It is a big question. In the end I result in ‘all the bills… and I can’t seem to get up’. Each time you start to ask the larger questions in life you will probably go through a labyrinth of small things to get your answer. “

Having been joined by Jukka Kiviniemi (bass), Berend Rombouts (guitar) and Jesse Bosman (drums), the five will present their new album this year in various clubs and festivals throughout Europe.